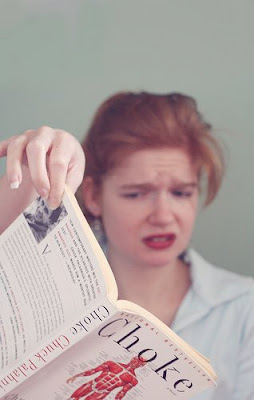 At some point during my â€˜reading careerâ€™, I needed to broaden my taste in books by stepping beyond the safety of predictable chicklit. I decided to read the likes of Gabriel GarcÃ­a MÃ¡rquez (for passion), Paulo Coelho (for depth), Douglas Coupland (for satire) and Chuck Palahniuk.

Chokeâ€™s protagonist is everything you really donâ€™t want to be or sit next to in a restaurant. He dropped out of medical school and earns his keep by working in a civil war theme park. But since he has his elderly motherâ€™s care to pay for, he also routinely pretends to choke on food in dozens of restaurants, and allows people to rescue him. How does it work? These people who â€˜savedâ€™ his life are manipulated into feeling responsible for him staying alive and well, so he ends up receiving money from these… heroes on a regular basis.

So. Thatâ€™s Victor Mancini for you.

While Choke is another example of Palahniukâ€™s unique ability to create bizarre people in dark, dysfunctional situations, he just pushed too hard and ended up going overboard.

Because I hadnâ€™t actually mentioned the sex addict part of Victor Mancini yet. The graphically and often described sex addict part. It was all a little too disgusting, and even though with Palahniukâ€™s characters you should expect disturbing behaviour, I didnâ€™t particularly care for reading every single detail of Victorâ€™s addiction. Repeatedly.

Often, what he described wasnâ€™t even relevant to the story and especially not necessary to build the character.

Donâ€™t let this review stop you from trying any of the above novels. Do not write off Chuck Palahniuk, I know I wonâ€™t.

But I will write off Choke. Personally, Iâ€™d much rather curl up on the sofa with some of that predictable chicklit I mentioned earlier in this review. Or, you know, actually choke.