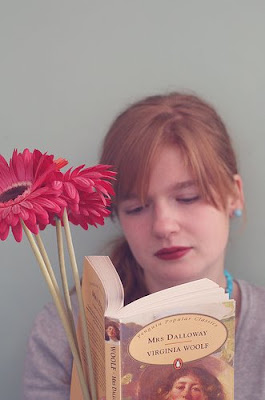 After reading Michael Cunninghamâ€™s The Hours, a truly stunning book based on Virginia Woolfâ€™s renowned novel Mrs. Dalloway, I made a mental note to read it one of these days.

It is a beautiful but sweltering hot summerâ€™s day in London, at the end of World War I. Clarissa Dalloway, known locally to be the hostess of magnificent parties, is preparing for a party to be held that evening. As the day carries on, Clarissa learns of the return of former lover Peter Walsh and her mind wanders back to her past, forcing her to think about the choices sheâ€™s made and to become more aware of the current events and people surrounding her.

Virginia Woolf used what is known as â€œstream of consciousnessâ€ writing, indicating that her words read like thoughts in oneâ€™s head. The downside, as I experienced it, was that the sentences were at times endless, causing me to lose track of what I was reading in the first place.

Add the constant use of semi-colons to this, and we have ourselves a novel which requires its readers to regularly â€œrewind, and just play that againâ€. In fact, a complete re-read of the entire novel would be necessary in order for it to be fully, or partially grasped.

Though the book was at times incredibly confusing, I must stress Woolfâ€™s style is a most refreshing and even enchanting way of writing. I was incredibly fond of how Woolf switches between narrators so smoothly, flowing from character to character to character, the next picking up where the previous had left off â€“ I could imagine myself to be a mindreader, exploring a crowd unnoticed, listening in on one mind after the other. This in itself is why I urge you to try reading this despite the possibility of having to struggle through the long sentences and semi-colons.

But thereâ€™s more to this novel. First published in 1925, Mrs. Dalloway is obviously ahead of its time, as it addresses subjects such as attraction or love between two females, doubts of happiness after years of marriage, divorce and finally the severe mental illness of Septimus, a shellshocked man whose only way out could very well be suicide.

(A representation of Woolfâ€™s own persona, perhaps.)

Whoâ€™s afraid of Virginia Woolf? Iâ€™m not; I hope you wonâ€™t be afraid, either.