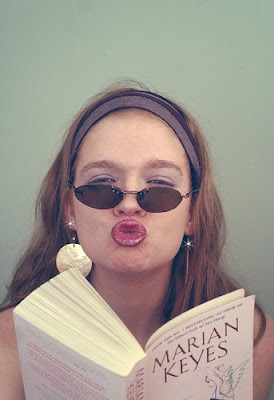 Ah, chicklit. The word reminds me of my former worries of having to face a future where Iâ€™d surely end up an old spinster with twenty cats. The times when I would comfort my single self by watching â€œBridget Jonesâ€™s Diaryâ€ repeatedly and by burying my nose into cheesy chicklit novels â€“ instead of going out there and making things happen for myself. (Oh, the sabotage.)

Apart from reading The Devil Wears Prada, the only other books Iâ€™ve read lately that fit the chicklit genre have been books by Marian Keyes. She writes these fun, easygoing beachbooks with a humane and realistic undertone; her books touch on serious subjects without forced sentimentality.

Her main characters that Iâ€™ve read about so far have not been the typical â€˜Clueless, clumsy London girlsâ€™, feministic on the surface yet always ending up with the man they initially despise (but then realize is â€˜The Oneâ€™). Basically, chicklit according to Marian Keyes does not mean butchering the â€œPride & Prejudiceâ€ formula, while adding in as much contrived humor as possible.

In â€œAngelsâ€, Maggie Walsh (the goodie two shoes of the five Walsh sisters Marian Keyes regularly writes about) is forced to regain her individuality after realizing her marriage of nine years with Garv is over. Maggie decides to leave him and embarks on an adventure which brings her to visit her friend Emily, a scriptwriter living in Los Angeles, where Maggie gets to do things she otherwise would never have done.

I guess having read it all now, all I have left to say is: well, colour me unimpressed.

â€œAngelsâ€ didnâ€™t manage to move me as much as â€œAnybody Out Thereâ€ or â€œRachelâ€™s Holidayâ€, books about two of Maggieâ€™s sisters (respectively Anna & Rachel Walsh). The main character just wasnâ€™t interesting enough.

And thatâ€™s really disappointing coming from Marian Keyes, whom I always considered to be an author sharing the flaws and emotions of her main characters. Maggie throughout most of the book remained a bit of an incoherent and shallow character.
What drove her to do things a certain way? That wasnâ€™t known until the very last sections of the book, which is not a good place for character building. Keyes was too late in giving her heroine some depth, because she was apparently more concerned with describing haircuts, lesbians (yawn) and Emily-on-the-phone-with-producers-oh-the-drama.

This book for the larger part focused on Maggieâ€™s experiences in the Hollywood scene, starring one unsympathetic stereotypical character after the other.
Jeremy Piven in â€œEntourageâ€ is all the â€˜Hollywoodâ€™ I can stand. Especially now that Iâ€™ve read this.

As I continued reading (yes, I managed), La La Land really became the most boring location I can think of â€“ the desert would have been a more interesting place â€“ and the nearly 500 pages of the book ended up being a drag to get through in order to reach an ending which wasnâ€™t satisfying, but the only logical way to go.

This book was not horrible in itself and it was entertaining at times, but â€œAngelsâ€ came dangerously close to being the kind of clichÃ©d chicklit I tend to avoid nowadays. There is much more to Marian Keyes.

So I leave you with three recommendations: leave "Angels", try â€œRachelâ€™s Holidayâ€ and do watch Jeremy Piven in "Entourage". Seriously.

Copyright Â© Karin Elizabeth. All rights reserved. This photo is public only so you ("the public") may view it; it is not to be used as free stock. Use without written consent by the author (that would be me) is illegal and punishable by law; I will take action. This goes for blogging, as well. So, contact me beforehand if you are interested in using this image or any of my others (non-)commercially.

R&R series with photos and text Â© 2008 Karin Elizabeth.
Please contact me if you'd like to use this review.