J.K. Rowling
Harry Potter and the Philosopher's Stone
(Sorcerer's Stone in the US)
Bloombury
Cover art by Thomas Taylor
200-something pages (lol don't have the book with me now)
Flickr post 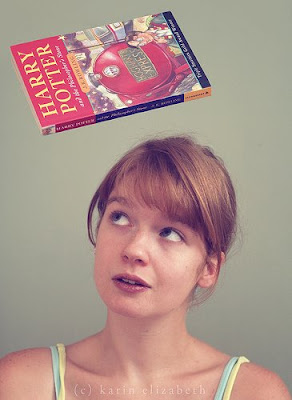 Read this before in 2000. But I'm reviewing it as if I hadn't read it before.
As I rate it, however, I do compare it to the other books in the series.

With the first installment in the now world famous Harry Potter series, J.K. Rowling's brilliant and most detailed imagination takes us into a world of broomsticks, wands, spells… and sports.

Orphaned when he was only a baby, Harry Potter is forced to live with his uncle and aunt, Vernon and Petunia (and their dreadfully spoiled son) in a situation which can only be described as child abuse. Harry has endured this for years on end, and can only see many more years in his future. Until one day, a letter arrives. His uncle's… odd paranoia keeps Harry from ever seeing the letter. The writer is persistent, however; more copies of the letter follow. And more. Until Vernon cannot stop Harry from seeing the contents of one of the copies.

And with it, his life changes forever. Because from this day on, his 11th birthday, Harry is no longer the nobody, the boy worth nothing to his own relatives, the no good kid with nothing special about him except maybe the lightning bolt shaped scar on his forehead.

Not anymore. Harry is an actual wizard. And not just any wizard… a famous wizard! Harry Potter is the survivor of a brutal attack by the wizarding world's cruelest villain: Lord Voldemort.

With a new sense of identity and new people (friends) surrounding him, Harry has the chance to start over and study at Hogwarts, the school of witchcraft and wizardry, where he'll receive the education necessary to become a trained wizard. He encounters quirky magic shops, powerful wizards, exciting sports (Quidditch) and strong new friendships. But in the meantime, something is very, very wrong…

This fantastic series is possibly one of the most brilliant series I have ever had the pleasure to read.

The first book already shows the time and skills Rowling has so obviously put in her work; it is a creatively (and almost meticulously) written novel with a rich amount of details about this magical world, this other world that has brought joy and excitement to the young and old of our world.

(A wonderful introduction to the series, but not quite as exciting as some of the following books, hence the 4/5.)

Book review & accompanying photo copyright Karin Elizabeth. Do NOT copy and repost or reproduce the text or photo anywhere without my permission. Contact me if you'd like to use this review.
Copyright Â© Karin Elizabeth. All rights reserved. This photo is public only so you ("the public") may view it; it is not to be used as free stock. Use without written consent by the author (that would be me) is illegal and punishable by law; I will take action. This goes for blogging, as well. So, contact me beforehand if you are interested in using this image or any of my others (non-)commercially.