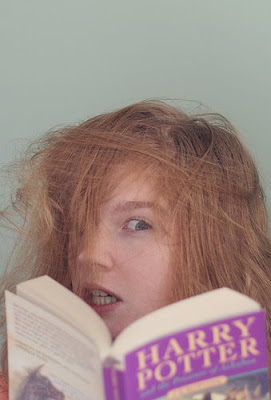 Have you seen this wizard book reviewer?

Why so Sirius?
I love this character and had to do this. Okay so it's campy and would've been great for Pirate Day. But oh I like it. Also, the corny wand photos just didn't quite cut it for me.
I had sharper images, this one is slightly blurry. But this one had that look down. Screw technique, hollah to the crazy expression.

Harry Potter, the young wizard, is about to start his third year at Hogwarts, when one of the most feared criminals in the history of the magical world escapes that one notorious prison: Azkaban. It soon becomes clear that this murder convict, Sirius Black, is looking for none other than Harry.

Putting on his brave face, Harry continues his studies at Hogwarts, aware nonetheless that Sirius is getting closer to getting what he wants. Despite all the precautions taken by Dumbledore, Harry could well be in more danger than ever…

While re-reading this third installment in the immensely popular series, I was once more convinced that this one is the most exciting of the bunch. Rowling offers plenty of relevant background information to her world and her characters. The interwoven relationships between characters are further explained, and these revelations often leave you feeling surprised.

Keeping true, in great detail, to the world she has created, Rowling allows Harry and his friends to deal with situations most of which force them to mature, pushing them into facing their fears.

With Azkaban comes a turning point; the atmosphere of the series turns darker. While the author keeps her wit and humor intact, she's clearly taken the Harry Potter series to a more serious level with book 3, setting the tone and laying the groundwork for the remaining four books to come.

The somewhat more complex plotline offers twists and turns of a less predictable nature (compared to the first two books); Azkaban raises the bar for the next Potter books, or basically for any book in the genre. If you've just started reading the series, stick it out to book 3 at least. Then form your opinion.