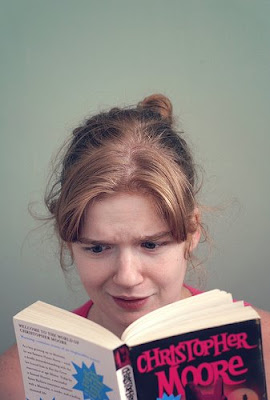 Oh lawd. What to make of this one?

Printed on the back of the book: "Warning, contains scenes of an implausible nature". That about sums up anything by Christopher Moore, including this older book right here, Coyote Blue.

The protagonist, Sam Hunter, is what you could expect a typical insurance salesman to be like. Leading on poor souls, taking their money and using it to buy that glorious vehicle and that incredible apartment.

When Sam meets Calliope, a troubled but very attractive blonde (your basic bombshell), he falls in love and realizes he's kind of lonely. He wants someone in his life.

Enter Coyote (a.k.a. Trickster), a God. Not to say he's like Adonis. Coyote is actually an ancient God, of the Crow tribe. Not exactly the company Sam was hoping for, what with Calliope obviously being his first choice, but Sam's going to have to deal with it. Coyote has some business with Sam and isn't going away just yet.

At age fifteen Sam fled the Crow reservation, running from the law, in hiding ever since. And Coyote, being the troublemaker that he is, naturally cannot resist stirring some things up…

None of Moore's books I've read so far have failed in being funny. Coyote Blue is no exception. While reading, I could often be often found shaking my head thinking: "How does this guy come UP with this stuff?"

Moore tends to add in a lot of hilarious action in all of his books; it's what I like about the guy and he usually pulls it off.

However, despite the laughs Coyote Blue provided, I couldn't connect as well with the storyline as I'd hoped. There were plenty of funny scenes and adventures, but sometimes it felt they were added in for the heck of it, breaking up the story and weakening it a little, instead of helping it along. Funny, weird, etc: yes. His strongest story: no.

But Coyote Blue has convinced me once again that Christopher Moore is one author I should recommend to everyone. He is either crazy or brilliant. (Or well, both.) Whatever it is, it works for him.

His books are uplifting and clever, with an edge. That goes for Coyote Blue as well.