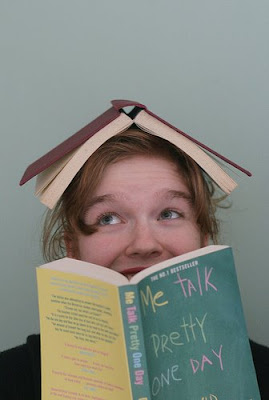 Hereâ€™s how it went down: I had just finished reading Ian McEwanâ€™s Atonement, a book that affected me quite a bit. Man, did I need a light, fun read after that one. A friend recommended I try out Me Talk Pretty One Day, by David Sedaris; I had heard of this book before and decided, sure… sounds good to me, Iâ€™ll get a copy of this book, made up of a collection of autobiographical articles divided in two sections: part one, and deux. For this review, I decided to point out some of my favourite essays. (Though my examples are just that; you really have to read the stories yourself.)

Part one offers a look into Sedarisâ€™ earlier years: growing up in a colourful Greek-American family in North-Carolina, failing at art school and doing drugzzz. The highlights in this section (for me):
1) Davidâ€™s father Lou (to whom the book is dedicated) and his passion to form a jazz band a with his uninterested and most importantly musically talentless kids (Giant dreams, midget abilities).
2) Apart from reading about Sedarisâ€™ sisters â€“ including Amy, The Comedian â€“ a foul-mouthed brother is thrown into the mix, saying the nastiest things to his parents while referring to himself as The Rooster (You canâ€™t kill the rooster).
3) A visit to the bathroom reveals the unflushable eh.. stool sample left there by Sedarisâ€™ toileting predecessor. Itâ€™s not Davidâ€™s. But people will think it is. Whaddaya gonna do? (Big Boy)

Part deux, as you may suspect, tells of Sedarisâ€™ move to Paris with his partner Hugh. For me this was the funniest section, including writings on subjects such as learning French or mocking his fellow Americans a little. Hereâ€™s a selection of other fun bits:
1) Sedaris is trying to learn French, and one of his methods is to listen to a French â€˜medical phrasesâ€™ tape. Talking a walk through Paris with his tape playing, Sedaris can be overheard saying things such as â€œCould I trouble you for a stool sample?â€ (The tapeworm is in).
2) Sedaris is the American in Paris, and on the subway he overhears American tourists talking about him. They think Sedaris is a French, smelly pickpocket. Heâ€™s intrigued with what they come up with and notes down the dialogue in Picka pocketoni.
3) Lou returns, as he does often enough in this book â€“ which does reflect a lot on Davidâ€™s relationship with his father, as it turns out â€“ and this time with one bad habit: food hoarding. Reminiscent of someone I know who saves food until it goes bad and then eats it anyway, Iâ€™ll eat what heâ€™s wearing had me laughing quite a bit, saying â€œOhhh donâ€™t I know it!â€ several times.

And that recognition is perhaps why Me Talk Pretty One Day is a perfect light read, but one that registers in your brain, one you remember. Quite recently, in the car on the way to Wilâ€™s place, I started telling him about Sedaris and some of the stories I selected above. Kind of like, â€œYou wouldnâ€™t BELIEVE what David did next!!â€ And thatâ€™s when it hit me, why this book is so damn likeable. It reads like David is someone you know. He shares his stories with you like youâ€™re buddies. When reading, it kind of feels like youâ€™re at a bar with him, enjoying a few too many appletiniâ€™s, and there he is, confiding in you his most personal (ergo, embarrassing) moments, and the two of you are laughing so hard, everyone in the bar is eyeing you, wondering whatâ€™s so funny.

Now, being a class act dork myself, I always respect someone whoâ€™s not afraid to embarrass himself, entertaining me in the meantime. By opening himself up so candidly regarding recognisable human observations (the everyday life) he has found the perfect formula; David Sedaris may consider himself to be a failure in visual arts, but he most certainly mastered the art of comedy through writing.