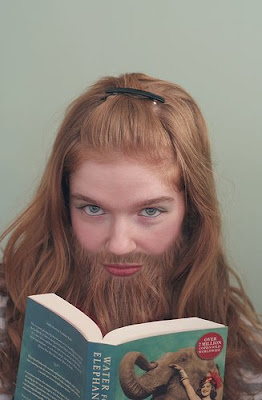 The things I do for this series.
Normally when you think: Circus… you think clowns or something, right?
…I think Bearded Lady. I didn't grow one overnight, LOL. I photoshopped this. Took me ages to get it right so you better dig this one. Haha. Had some trouble with facial expression for this one. Decided to go with confidence, because the existing bearded ladies I've googled for 'inspiration' are so, so confident. Awesome.

Jacob Jankowski, 90 years old, struggles to maintain his autonomy as his memory starts to deteriorate. When a circus comes to town, however, he finds himself reminiscing the past.

Jacob Jankowski, 23 years old in the nineteen thirties, is only one exam away from graduating with his veterinary degree when the unthinkable happens: an accident killing both of his parents leaves him orphaned without a dime left to his name. Without any other family to turn to, Jacobâ€™s loss leads him to just drop everything and join the Benzini Brothers circus.

Putting his education to use, heâ€™s hired to work as the circus vet, and it is because he can work with the animals that Jacob starts to accept his new life. Two special ladies enter his life, one of them being Rosie, an intelligent and stubborn elephant. But it is when he meets the second female beauty, performer Marlena, that Jacob realizes he doesnâ€™t want to leave the circus anymore. Jacob forms bonds with both Rosie and Marlena, much to the dismay of Rosieâ€™s trainer August, a violently unpredictable man… who also happens to be Marlenaâ€™s husband.

The moment I started this book, I was captivated, finishing it in pretty much one sitting. Set in the time of the Great Depression of the 1930â€™s, Gruenâ€™s prose sweeps you up and carries you straight into the Benzini Brothers train. The edition I read included amazing black and white photos, featuring performers from â€“ for example â€“ the world famous Ringling Circus. Even though I was reading words, Gruenâ€™s writing conjured up lively images in my mind, and I often experienced reading this book as watching an old film (with stunning cinematography).

What struck me most was Gruenâ€™s ability to describe this traveling circus culture â€“ usually associated with fascination, fun, magic â€“ in an honest manner. For humans and animals alike, circus life can be cruel, filled with selfish people who will literally throw you off the train if it benefits them in any way. Itâ€™s survival of the fittest. Circus life and human relationships in Water for Elephants arenâ€™t beautified, much less made into a fairytale. Itâ€™s harsh, not pretty. It was clear that the author researched the subject with the intention not to let her book become too fantastical. Effort was put into this novel, as well as feeling; flaws are easily forgiven.

From what I gathered when I read the description on the cover, I did expect a bigger role for Rosie the elephant. However, she proved to be a lot more relevant than I gave Gruen credit for initially and the book ended up being engaging in a different way.

A pageturner if I ever read one, Water for Elephants is one you must include in your library… and a book you must read with an open mind.