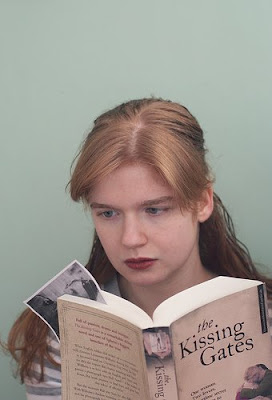 World war I, 1914. The Christmas truce brings British soldier Hal in contact with German soldier Wilhelm, who bestowes upon Hal a photograph to be passed on to the woman he loves, a British teacher named Sam, as a proof of life and a token of Wilhelmâ€™s love.
Some time later, Hal has recovered from injury in battle; he decides to find Sam. But the moment he sees her, Hal is sold; he falls in love with her and instead of giving her Wilhelmâ€™s photo, he decides to pursue her for himself. While he fights for her affections, Halâ€™s conscience threatens to intervene with his one chance at love, as he keeps Wilhelmâ€™s photograph hidden from her.
The novel had a unique start but it took a while to get into the following hundred or so pages. After that, the story started to pick up pace.
What I missed most was authentic language. Hal is the narrator of The Kissing Gates; supposedly itâ€™s his account written shortly after the war. One could expect the language used to be more suitable for its supposed time. I often found phrasing and dialogue too modern, hampering the (in this case) necessary authentic feel of an early 20th century atmosphere.
The writing style left a lot to be desired, but the book was unpretentious, easy to read while enough happened to keep me interested. There were some scenes threatening to turn The Kissing Gates into a Harlequin novel, but thankfully Ford managed to keep it to a minimum. The ending was very redeeming and I was relieved Ford went in this direction.
Not amazing, but overall not a disappointing read about those human strengths and weaknesses involved in loving someone against all odds.
3/5
October 26th 2008