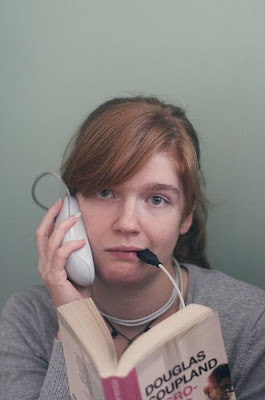 One of our early computers was an MSX (a Microsoft creation). My brother and I played games on it, mostly. The eighties, good times. Somewhere in the nineties, our MSX made room for our first personal computer, or PC. Many more would come, and soon Iâ€™d get my own.

I was barely aware of what we were getting ourselves into… how dependent we humans would be on these machines several years later. Itâ€™s 2008 now, and I cannot imagine my life without a computer anymore. I am using my computer to type this review, to process the self-portrait I took as part of this review, to listen to music because it helps me when I work, to talk to Wil. And so on, and so forth. Around 1995, I had no idea yet of this future that is the now, where we are practically enslaved to our computers. Technologyâ€™s… serfs.

But someone knew. While I was busy being clueless, in 1995 Douglas Coupland got his book Microserfs published, a book from the perspective of one of a group of ex-Microsoft employees, who have left the company to start their own Lego software.

Daniel Underwoodâ€™s computer journal (reminiscent of todayâ€™s blogs) is quirky, and extremely stereotypical of computer programmers. And consequently, itâ€™s a lot like jPod. (The correct way to put it is: jPod is a lot like Microserfs. But I read jPod first even though it was published 11 years after Microserfs.) Of course jPod and Microserfs are different enough, but the same kind of narrative was used with the same tricks and turns. I knew the drill. Thereâ€™s a reason jPod is sometimes referred to as Microserfs 2.0.

Microserfsâ€™ blog-like form and other features are noteable. My edition for example contained a few purposely ripped pages. Miscroserfs also contains the letter by Patty Hearst from when she was kidnapped. And the kind of trademark random phrases and words; representations of the computerâ€™s subconscious (if it could have one).

Microserfs reads slowly, prolonged due to the lack of much plot activity, and I can see why that would bother some other readers.

But â€“ little plot, thatâ€™s kind of the point. The book isnâ€™t supposed to be action packed with rollercoaster rides and other adventures. Itâ€™s supposed to be about a group of dysfunctional people who have no life other than their work, no other passions besides being geeks. Not that they donâ€™t want excitement or change (Daniel has a crush on Karla for example), but theyâ€™re lax about it, comfortable in their safe techno-bubble. Coupland offers you a look into their world and perhaps also a look into our own (in 1995 considered) future.

So as much as I do see that the plot isnâ€™t the main thing here, I do prefer Couplandâ€™s heavier works, where his characters are going through, or have gone through, something really intense, life-altering. A high school shooting (Hey Nostradamus!). Without warning, a loved one enters a comatose state (Girlfriend in a Coma). A young man appears out of nowhere, claiming to be your son (Eleanor Rigby).

I do think Coupland intended for his microserfs to be these easygoing characters, but at some point I kind of felled dragged into that boring serf life. (…to which I have to confess, I think that is quite an interesting evocation and it leaves me wondering whether or not this was part of his intent…? Coupland does leave me wondering about a lot of things.)

Couplandâ€™s book, especially for its time, is clever and almost prophetic. Microserfs naturally means to offer insight in the lives of those in the forthcoming digital technology era, and thatâ€™s definitely accomplished here. But as Iâ€™m using my Microsoft computer to type this, I find my curiosity and fascination to have reached their expiration dates long ago. An amusing and clever book, but â€“ and Iâ€™m sure having read jPod earlier is part of the reason â€“ Microserfs is a book I personally feel is one Iâ€™ve read 13 years too late.