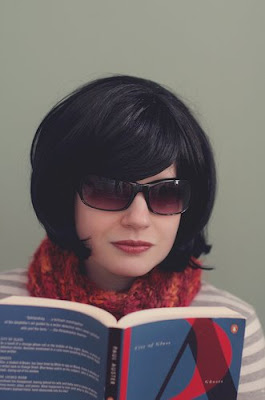 The only R&R featuring Ava, sort of my alter-ego. It had to be her this time. Youâ€™ll possibly understand when you read this review.

One morning last February, I was standing right outside a Starbucks in New York City and for some reason decided to look down. And there they were. Three twenty dollar bills. I planted my foot down immediately â€“ because it was windy there, around the Empire State Building. Then of course I looked around and waited for a couple of minutes, to see if anyone was groping their pockets or frantically looking for something. I could have yelled â€œYo, who lost 60 dollars?â€ but we all know people arenâ€™t that honest. Anyway, there was no one. So I kindly thanked New York, promised to give back to the city by visiting again soon and then I took Wil to The Strand to spend the money on a just cause. Books.

One of the books I decided on was Austerâ€™s â€œNew York Trilogyâ€, partly as a nod to the city, which serves as the atmospheric backdrop to most of Austerâ€™s novels.

â€œThe New York Trilogyâ€ is in intricate work consisting of three detective novellaâ€™s, seemingly stand-alone. Each novella has its own storyline, all with common themes and elements.

â€œCity of Ghostsâ€ begins with a phonecall to Daniel Quinn, a writer, who is mistaken for â€˜Paul Austerâ€™ (yes, Auster features himself in the book), whose services are requested to help search for a young manâ€™s father, one Peter Stillman. Bored with his life and lacking inspiration for his writing, Quinn decides to pose as â€˜Paul Austerâ€™ and takes on the job to find Stillman. Instead of finding much of an answer, Quinn instead slowly loses something… his grip on himself.
â€œGhostsâ€ is an interesting take on the detective novel, reminiscent of film noir (or a graphic novel). Blue is hired by White to spy on Black… but what if the spy becomes the one spied on?
Finally, â€œThe Locked Roomâ€ is the one connecting the trilogy as a whole. A mediocre writer (the narrator of this third novella) becomes the literary executor for an old friend, who has mysteriously vanished. What happened, and why is it so hard to let go?

To me personally, this quote found in â€œThe Locked Roomâ€ is a perfect way to begin explaining what Auster is trying to do: â€œThe story is not in the words. Itâ€™s in the struggle.â€ (p.346 of my edition.)

In this trilogy, which is a wonderful example of meta-fiction, Auster is exploring the techniques used in the writing of detective novels. Heâ€™s looking beneath the surface of the novels in the detective genre. Identity is a big factor; each â€˜detectiveâ€™ in this trilogy is trying to find someone else, but obsession forces him to be confronted with his own self.
Introspection is another theme, which is evident from the fact that Auster has incorporated a lot of himself in this book, not only by introducing the character â€˜Paul Austerâ€™ but also by using the names of various loved ones for his characters (one character is named Sophie, also the name of his daughter. Another is named Daniel, the name of his son, and so on). Details such as these makes me value the idea that perhaps Auster writes to also explore himself as a writer and individual.

What Auster has accomplished is that the reader, initially a bystander, becomes a â€˜detectiveâ€™ too. Reading the trilogy is thrilling, adventurous even; I found myself on the look-out for underlying connections and patterns throughout the book. Trying to find clues, searching for possible predictions and what ties these three novellas together. The â€˜detectivesâ€™ in the novellas become the watched; the readers are the ones observing them, trying to find anwers.

Are there any answers? There is some form of a conclusion, yes, but much is left unresolved. But that isnâ€™t necessarily what makes a book great. â€œOracle Nightâ€, another one of Austerâ€™s meta-fiction novels, was quite unresolved in many ways as well, but I learned to be more aware of the reading and writing process, not just to focus my attention on a satisfying conclusion.

What I gained from â€œThe New York Trilogyâ€ is to actually get a real kick out of the reading experience. I am a bit of a â€˜detectiveâ€™ now no matter what book I read.