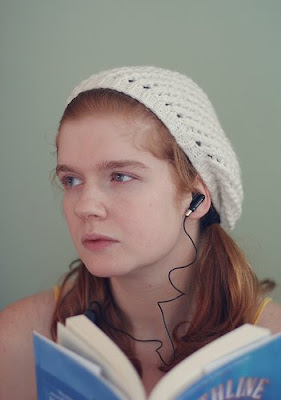 Last summer I got it into my head to try and find a book that Iâ€™d read about once, but all I could remember was that the cover had a pretty illustration of a snowglobe on it, and the book included an accompanying soundtrack. Failing to remember the authorâ€™s name or the full title was not exactly helpful. It wasn't until the very last day of my summer traveling, when I hopped into a giganormous Borders store, when a stroke of pure luck put me in front of the bookcase which held a copy of Willy Vlautin's "Northline". My eyes resting on its spine, my hands already gravitating towards it, I immediately recognized it as the book Iâ€™d been searching for. What a relief.

Being new to Vlautin, his second novel â€œNorthlineâ€ has taken me by surprise. I was expecting a sweet and lovely story telling one of those rare stories that will inspire you, one you wonâ€™t forget. What I ended up reading, is the complete opposite of â€˜niceâ€™… itâ€™s even better than I had hoped for.

Vlautin has written a book that isn't sweet, but brutal in its honesty, an eye-opener to life in the poverty-stricken class of Americaâ€™s society. The bookâ€™s characters aren't Miss USA contestants or suited up businessmen, but troubled people. Thereâ€™s bad peopleâ€¦ but also those good, kind-hearted people trapped in really bad situations â€“ people such as Allison (the girl, Vlautin calls her), a young woman who flees an abusive relationship and hitchhikes to Reno to build up a new life for herself there.

Struggling with her tremendously low self-esteem, she finds solace in her imaginary conversations with (the late) Paul Newman, her hero. Some people get a manicure to feel better, others imagine they're chatting with their biggest inspirations. Paul Newman berates Allison for beating down on herself too hard, and paves the road leading her to aspire to fight for herself. Those conversations at times seemed to exist so Vlautin could show off his knowledge of the movies Paul Newmanâ€™s starred in and what character he played "in that one" and "in that one". But the idea was charming, nonetheless, and necessary too, I think. Paul Newman provides a gentle counterbalance, a bright force illuminating Allisonâ€™s darker experiences, which are divulged in the book.

As raw as â€œNorthlineâ€ is, it is uplifting without being overly sentimental. The things that happen in Allisonâ€™s life, good and bad, are told by Vlautin pretty much objectively and it is up to you to react to it. This novel is written with a nonchalant air: feel as you must about it. I happened to be moved by the everyday kindnesses of the new people in Allisonâ€™s life, people who show to have faith in her through little things. When I finished, it all left me feeling cozy and optimistic in the end, but not in that fairytale kind of way. This was realistic, human.

The alt-county instrumental soundtrack which is included in my edition of the book matches the novelâ€™s melancholic but hopeful atmosphere, helping to gain a better understanding of everything that happens from Allisonâ€™s point of view and how she might be processing it all. Vlautin, whoâ€™s also in the band Richmond Fontaine, has proven himself to be a talented writer and musician, and has shown himself to be gifted at combining both of his skills.