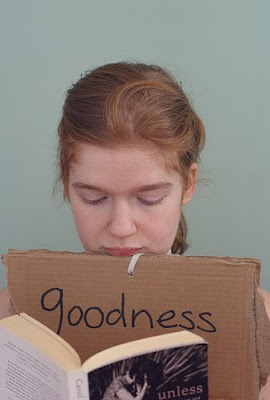 Carol Shields's last novel records the thought processes of a woman who loses her daughter in the most unimaginable way possible. Reta Winters is always doing her best to balance work life with domestic life, building a comfortable home with Tom and their daughters. A writer with increasing success, Reta is in the process of translating Danielle Westerman's memoirs when she learns of her eldest daughter Norah's decision to drop everything, only to be found spending her days on a street corner wearing a sign saying 'Goodness'. As Reta tries to make sense of her daughter's sudden withdrawal, she ponders her own life as a mother and considers her achievements as a writer, all the while trying to cope with her feelings of powerlessness.

It took me a while to appreciate this book. Reta at first seemed distant in her coping with her daughter's situation, her frustrations only evident from the rage which can be found in her sarcastic letters to male magazine editors (who always seem to shy away from mentioning female authors in their columns, something that greatly angers feministic Reta). I didn't like Reta at first; her monologue seemed self-indulgent at times, and I didn't care for her fawning over Danielle Westerman. But "Unless" quickly became about self-reflection. Reta mocks herself constantly; criticism of self made her admirable. Reta's feelings of loss were never dramatized – she would not let herself be pitied – but always humanized.

It was a particular section of writing which finally made me connect with Reta, a methaphor which brought out in myself the ability to empathize with her. The chapter 'Otherwise' (page 78 of my edition): before Norah's withdrawal, Reta sets out to find the perfect scarf for Norah's birthday. It takes her considerable effort, but endurance leads her to find the most beautiful, perfect scarf for her Norah. Only to irrevokably lose it in the silliest way, right under her nose. So much effort and love went into buying that scarf, only to end up losing it and feeling like a failure. This is when Shields captivated me, this is when I started to sense that Reta was opening up. Her situation was suddenly very real, her cool exterior fragile. She was a mother who could not reach her own child anymore.

"Unless" did not have the air of fiction. Though this book wasn't the last novel Shields was working on, it was the last she completed before she passed away [breast cancer, 2003]. As I read, it did very much feel like a final novel. One more book for Shields to say what she wanted, through Reta's voice. Perhaps she used this as an opportunity to unleash her opinions, expressing whatever was still in her mind.

This wasn't the first time I had tried to read "Unless". Several years ago I made it through some chapters. Why I couldn't finish it then perhaps has to do with feeling like I wasn't mature enough at the time. Since then, I have experienced a lot more in life, and a better understanding of what is truly important. And I think what matters most is that you can only do your best; extenuating circumstances may change things, but what does not change is that you have tried.