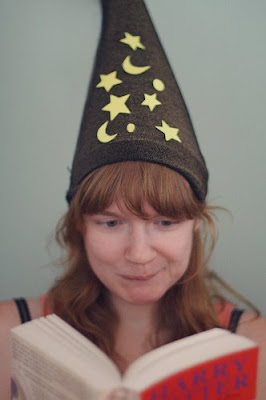 I didn't have a hat. So I ehhhh improvised, haha, and made something resembling a hat instead. Had a blast doing that 😛

For every student at Hogwarts, the new school year has an interesting start. Having had quite the adventure already by attending the Quidditch World Cup, Harry, Ron and Hermione are in awe as Professor Dumbledore announces that the Triwizard Tournament is to be held at Hogwarts this year. Hogwarts as well as two other, international wizarding schools will each select one champion over the age of seventeen to participate in bold challenges â€“ tests of skill, intellect… but mostly tests of courage. Harry, only fourteen, is excited and relieved that he gets to sit back and witness some exciting events at his school for a change, instead of finding himself at the very center of them…! But Harry is in for a big surprise… and suddenly, it doesnâ€™t matter how old he is.

While on the subject of age, J.K. Rowling allows her characters to mature even further in book 4. Already setting a darker mood in Harry Potter and the Prisoner of Azkaban (book 3), the kids really have a lot of additional growing up to do. As Harry, Ron and Hermione grow up, so do the books themselves, which to me is an interesting development.

Rowling is obviously driven, writing fiction which is initially intended for children, but which is increasingly readable and enjoyable for adults. While Rowling keeps the seriesâ€™ humor and whimsy intact, it is clear that her fourth book is not â€˜as cuteâ€™ anymore; Goblet of Fire is grim, scary at times. J.K. Rowling goes a little â€œoff scriptâ€ with Goblet of Fire, creating new circumstances for her characters, and so many obstacles for her characters to overcome. The Triwizard Tournament seems like a training session, as if Rowling is using the opportunity to prepare her characters for whatâ€™s yet to come. And you know itâ€™s going to come. Gobletâ€™s ending clearly functions as the beginning of something else, marking an enormous change in the series as a whole. Innocence is lost.

Once you finish this book, you realize thereâ€™s really no way back. Not for the characters in the series, not for you reading the series.

(My only real complaint involves the house elves, possibly the most irritating group of characters ever invented, but the rest of Goblet of Fire makes their presence acceptable.)