NOTE: I am still in the middle of renovating my new place. Posts will continue to be less frequent for the next month or so. But I'm still happily reading & reviewing in the meantime. Think of it as… you getting a lot of extra posts coming up in the future. 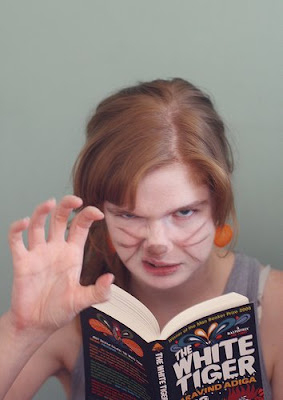 Since I've started this project, I've tried to include a variety of books in their diverse genres and styles; from literary classics to contemporary, it's being read and reviewed right here. I do tend to pick up titles that are somewhat rare, unheard of. Quirky novels that not a lot of people have heard of before, those are the ones I adore most. Yet I also feel that I can't skip out on the books with the buzz, such as the 2008 Man Booker Prize winner: The White Tiger, the now well-known debut by Aravind Adiga.

Of course, that was not the only reason I read the book. The White Tiger is a portrait of a young man in India, chauffeur Balram, whose desire to make something of himself, to rise up in society, leads to him killing his boss. In this satirical account written to, of all people, Premier Jiabao of China, Balram chronicles the path leading to his very own corruption, resulting from his dissatisfaction with his socio-economic status, and the lack of opportunities he has in his country, being from a lower caste. He's a rooster, stuck in the coop, and he wants out.

Balram, who considers himself to be more than anything an entrepreneur, shows no remorse for his crime. He justifies the murder he has committed because he feels he deserves more than this life. This is what made this novel interesting to me; Balram in effect becomes that what he despises the most. The man who thinks he can get away with anything. The man who'll screw over other people to get what he wants. The man who thinks he has the right to kill to get what he wants. He's no better than the man he has killed. Though I feel he knows this (after all, who does he choose to relate to?), apparently having no real conscience about what he has done makes Balram an astounding narrator. Or, untrustworthy.

Quite the metamorphosis, as Balram goes from being just another rooster to being the powerful free predator – the white tiger.

However, when I finished the book, I found myself saying, "Wait. This was it?"

To me personally, this book isn't one of the best of the year. Of course the story is intriguing enough, but at the end of it all, it falls a little flat. Perhaps it is slightly too satirical for my taste, the approach a bit too easygoing for a subject which is actually rather loaded. It could have meant more.

The book is by no means boring, but for a book which provides readers with a critical look into today's India, it lacks the necessary passion.

(Murder.) It's not personal. It's business.