Note: I have read all Harry Potter books prior to beginning project Reading & Reviewing (Jan '08) and decided to re-read them for this project. I read Beedle in between re-reading the HP series and decided to review it in between, too 🙂 I've read Deathly Hallows (July '07) prior to reading Beedle. 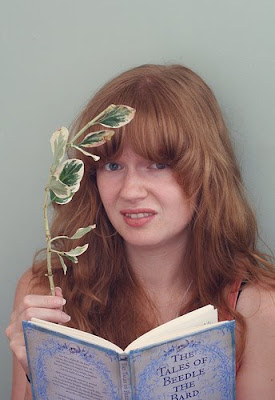 Photo: thought behind it stems from story Babbitty Rabbitty and her Cackling Stump, in which a King believes his ordinary twig to be a fully functioning wand of 'tremendous power'.

Harry Potter has had his last adventure; Deathly Hallows was published in 2007 and with it, the series came to its end. But J.K. Rowling did not stop there; for charity and also to offer something extra to the fans, she has penned down five fairy tales ("compiled and edited", of course, by Hermione Granger) and dubbed the little book, The Tales of Beedle the Bard, a familiar title to those who've read the entire Harry Potter series.

Featured, fictionally, in Harry Potter and the Deathly Hallows, the little storybook is now a tangible, real book to enjoy by everyone… young and old – just as with the rest of Rowling's books.

The stories:
– The Wizard and the Hopping Pot: a wizard inherits a magic pot from his father, which the latter always used to brew healing potions. Being the new owner of the pot, the son is frequently called upon by people needing his help.
– The Fountain of Fair Fortune: three witches (and a knight) seek the way to a magic fountain, which will help those who bathe in it with their problems. Who will be the one to have his or her problems vanish into thin air?
– The Warlock's Hairy Heart: a warlock is asked by his new wife (procured using the dark arts) to prove that he possesses a heart. Indeed he does, and it's quite a fuzzy one.
– Babbitty Rabbitty and her Cackling Stump: a King wants to learn magic in order to possess it all. A charlatan pretends to help him, by giving him a twig to use as a "wand", for instance. Whereas the King is easily fooled, Babbitty Rabbitty, the washerwoman, isn't.
– The Tale of the Three Brothers: the story relevant to readers of Deathly Hallows. Three brothers escape Death; as an act of revenge, Death himself grants the brothers three wishes, which will harm them rather than bring them joy.

Much like any fairytale, these stories are each cute as a button, yet still function as a tool to help teach a few valuable lessons to children – when reading between the lines of course. Though The Warlock's Hairy Heart might be too scary for the really small children, the stories qualify perfectly as bedtime stories for the little'uns, even if they have never heard of Harry Potter before (though that seems like an odd thing nowadays – after all, who hasn't heard of Harry Potter). The tales truly are that adorable. And useful.

For Harry Potter fans, the book possesses something worthwhile: every story is succeeded by commentary of Hogwarts Headmaster Albus Dumbledore, who seems to be moonlighting as a reviewer. Plenty of allusions are made to the world of Harry Potter, so the commentary would mostly benefit Harry Potter readers / Dumbledore fans who'd like just a little bit more Albus Dumbledore. He critiques the tales in his usual dry, quipping tone, making The Tales of Beedle the Bard a sweet book of stories as well as an awesome example of reviewing.

Despite the clever and enjoyable commentary added 'by' Albus Dumbledore, the book's "length" is meager for its price; however, the proceeds to go to charity and as I have pointed out before, the stories are a sweet addition to any old school fairytale books for children. For Harry Potter readers, Dumbledore's critique's a bonus, and it also answers a few questions that might be raised after reading Deathly Hallows.

It is worth the buy, then; The Tales of Beedle the Bard is a short, small book, but of a nearly endless value.