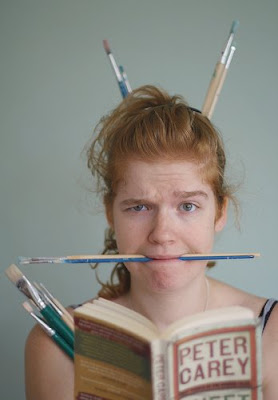 "I don't know if my story is grand enough to be a tragedy, although a lot of shitty stuff did happen."
– Theft, p.1

Reading that first sentence is what made me buy this book by renowned Australian author Peter Carey. Though not quite like "It was the best of times, it was the worst of times", Theft's first sentence captivated me, and made me curious for more. I bought the novel and shelved it for a few years; knowing that I had it in my book case was enough for the time being.

Michael 'Butcher Bones' Boone is a formerly successful painter, recently divorced and generally feeling as low and uninspired as can be. That's all about to change when he meets Marlene Leibovitz. Butcher is intrigued for a number of reasons. Marlene is a modern day damsel in distress, beautiful as they come. Plus her last name… could it possibly mean she's related to Jacques Leibovitz? Butcher wonders. Could this beautiful woman have some connection to Jacques Leibovitz, one of the most famous painters in recent history? Sure enough, Marlene's married to Olivier Leibovitz, Jacques' son. Oh, and just an extra tidbit about Marlene here: she's a thieving con artist.

Together with his idiot savant brother Hugh 'Slow Bones' Boone, Butcher tells the story of life since meeting Marlene, a life in which art theft becomes a central theme. The plot is eventful and entertaining enough, but I could not get into it as much as I had expected. The art theft plotline simply did not captivate me.

Rather, it is the brothers' relationship (one that reminds me of Earl and Randy, My Name is Earl) which quite immediately proves to be the most interesting part of the book. Their alternating voices are distinct, but there's this wonderful interaction. Whereas Butcher's narrative is evasive and secretive, Hugh is more comfortable with honesty and his blunt narrative style is funnier because of it. A lot of what Butcher refuses to tell us, Hugh has no problem with divulging.

And while Butcher keeps pointing out to us that his brother isn't the sharpest tool in the shed, it actually becomes more clear with every page that Hugh is rather perceptive, and a lot smarter than he is given credit for. For me, Hugh and his observations steal the story, not Butcher with his artistic sufferings – yawn – or Marlene with her cunning tricks. No, Hugh's playfully written chapters were a delight to read. Hugh owns Theft.

Apart from Hugh's narrative perhaps, Theft isn't an easy book to get through. I'm not a native speaker of English, but understanding the English language is usually never a problem for me. However, while reading Theft, I did experience some difficulty with the (Australian) phrasing and use of slang. Furthermore, Carey has a dense writing style, which requires the reader's full attention in order to be fully grasped.

This was my first try at Peter Carey and even though in the end, the art theft story did not hold me in suspense or thrill me, I do feel this is an author whose other work I need to consider reading. I hear great things about Carey's Oscar & Lucinda. You can expect an R&R of that at some point, to be sure.