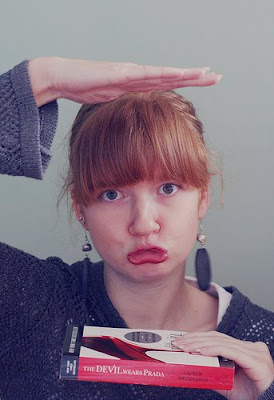 In this review, the book has not been compared to the movie; I wanted to review the book in itself.

As a horribly unfashionable person myself (at least, thatâ€™s what I believe, as Prada does nothing for me and I canâ€™t for the life of me walk in heels, oh, and I like my hips), picking up The Devil Wears Prada with all of its fashion stereotypes meant indulging in a guilty pleasure.

Andy, a freshly graduated aspiring writer, ends up landing an unlikely job as junior assistent to Miranda Priestly, fashion editor and bitch extraordinaire. I say unlikely, because Andy doesnâ€™t care about fashion; she hopes one year as Mirandaâ€™s assistant will open the doors to her future as a writer for The New Yorker, a magazine the polar opposite of Mirandaâ€™s Runway magazine.

While taking on the most ridiculous tasks (from drycleaning to coffeeruns to more coffeeruns because the other coffee had slightly cooled off), Andy tries to keep herself afloat in the superficial pool that is the fashion industry according to Miranda, trying not to let everything take its toll on her personal life â€“ though inevitably, Andyâ€™s carreer does wreak havoc in certain relationships.

Although Andy might have done herself a favour if sheâ€™d put up an â€˜Whatever, itâ€™s temporary, Iâ€™ll just suck it upâ€™ attitude instead of allowing herself to rage on the inside, Miranda really is a foul woman and I sympathised with Andy.

I couldnâ€™t quite muster up any sympathy for her boyfriend Alex or her best friend Lily, as I found both of them to be the selfish ones, as opposed to Andy.

This book is satirical to the max, definitely what I longed for when I started the first page (re: fashion stereotypes), though I somehow feel cheated.

Here I was, a naive unfashionable person, and having finished this book I somehow seem to know a whole lot more about Prada and Manoloâ€™s than I really care for.

Weisberger, with her no-mercy descriptions of her various shallow characters, wants me to be repulsed by the fashion industry and its rather ridiculous standards, but in the meantime she is effectively trying to seduce me into admiring, and perhaps even desiring this pair of Jimmy Chooâ€™s. I remember completely drooling over eleborate descriptions of Andyâ€™s make-up case, sponsored by Runway. What? Why? That wasnâ€™t supposed to happen. This was supposed to be… satire, mocking the fear of eating three calories more, stuff like that.

…I feel dirty. Quite possibly, a little cheap too.