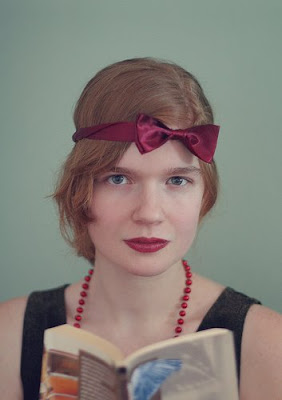 In the roaring twenties, Nick Carraway moves from the Midwest to Long Island Sound after he graduates from university. He quickly establishes contact with one of his relatives, Daisy, and her arrogant husband Tom, both belonging to the wealthier part of society. Soon after he settles in, the name Jay Gatsby quickly becomes inescapable.

So who is Gatsby? There are plenty of rumors circulating regarding the manâ€™s background (â€œHeâ€™s a spy! A war hero!â€), but all Nick knows for sure at the moment is that Gatsby is living right next door, in that big hospitable mansion of his, throwing parties free for anyone to attend. When attending one of those parties, Nick gets to know Gatsby â€“ and a friendship forms.
Meanwhile, Gatsbyâ€™s still-existing love for an old flame of his continues to affect him and he asks Nick for help… because the love of his life is none other than Daisy. Daisy, the one person heâ€™d do anything for. Daisy, Gatsbyâ€™s idea of perfect.

As soon as I started this exceptional book, I was reminded of â€œOn The Roadâ€, another story told through the eyes of the main characterâ€™s best friend. (Fun fact I learned just now: a title Fitzgerald considered for this book was â€œOn The Road to West Eggâ€.) Though Kerouacâ€™s masterful novel is unique, I do feel â€œGatsbyâ€ is of an equal quality.

Apart from being a book filled with action and suspense, this is a captivating portrait of a man whose love makes him blind. Daisy may appear to be charming and wonderful, but she is really quite a selfish and materialistic person, having broken it off with Gatsby years earlier because he was too poor. Gatsby is endearing in a way, his naivetÃ© childlike in its innocence. He does not see Daisy for what she really is; she remains a dream to him.

The dream. Gatsbyâ€™s story is mainly a criticism of the American Dream and the value placed on money above all other things. Gatsby chases after the dream, having acquired a fortune for himself since Daisy left him, but Fitzgerald does not sugarcoat it: the American dream is an ideal, and striving to live it can come with severe consequences.

The author himself lived a life of luxury, but he struggled with the importance placed on materialism and the idea of getting ahead at all costs (through corruption, crime and immorality). Characters such as Tom and Daisy, part of the upper class, symbolize this feeling. They are unsympathetic, if not despicable people, placing themselves on a high pedestal for being â€œold moneyâ€. It doesnâ€™t matter who gets hurt along the way, so long as you get what you want.

Fitzgerald did not want to write this novel for the money, but to bestow upon the literary world a carefully written, powerful novel. He is considered one of the great American novelists, and rightly so, as I believe â€œGatsbyâ€ has helped to shape America as a literary country. It is a pity Fitzgerald couldnâ€™t live long enough to see that with â€œThe Great Gatsbyâ€, he has succeeded to pen down the novel that would make himself great.

Tip â€“ Be on the look out for â€œThe Curious Case of Benjamin Buttonâ€, the feature film starring Brad Pitt and Cate Blanchett. The movie is based on F. Scott Fitzgeraldâ€™s short story of the same name.