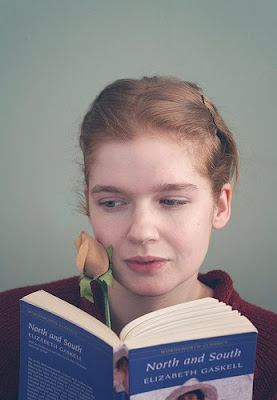 The yellow rose I believe stands for the turning point in this bookâ€™s heroineâ€™s life. That is why I used it in this photo, with a soft expression to represent Margaret before the change. Oh yeah and itâ€™s not a real rose like I wanted, but it will do.

Margaret Hale is but eighteen years old when her life changes in every aspect. Having lived all of her life in a quaint home on the countryside of southern England, little has she yet been confronted with the changes arising in the country during this time, the mid-nineteenth century. When she and her parents move from their southern home to the northern town of Milton, Margaret is in for the cultural shock of a lifetime: Milton is bustling, its industrial growth a far cry from life on the countryside, with mills now becoming prominent in Margaretâ€™s surroundings as opposed to the yellow roses of Helstone. The days in Milton are filled with battles between classes, unavoidable for gentle-natured Margaret, who soon finds herself in a turbulent clash of her own with Mr. Thornton, master of the mill.

Elizabeth Gaskell had a lot to tell; â€œNorth and Southâ€ is a complex novel which encompasses so many different themes.

Naturally, it is a romance story. Through bickering and frustration, Margaret and Mr. Thornton get to know one and other better, and slowly grow to understand the other. Some elements of are similar to Austenâ€™s â€œPride and Prejudiceâ€, where man and woman (Mr. Darcy and Lizzie of course) also misunderstand each other while increasing stubbornness threatens for them both to miss out on finding the best possible mate. â€œPride and Prejudiceâ€, though with serious angles at times, is a lot more gentle and witty. â€œNorth and Southâ€ is grim, sometimes downright tragic, and the romance of Margaret and Mr. Thornton faces the challenge of developing under darker circumstances, surviving because of a strong mutual passion.

Life in Milton is harsh, in the beginning too much so for the compassionate Margaret, whose heart is sometimes achingly big, but she comes of age in this novel, developing an open mind and learning to accept change when change is unstoppable, all the while never losing compassion for those she feels need it. She grows up, through loss and gain, and learns that life isnâ€™t all yellow roses and countryside walks. Mr. Thornton in turn finds himself influenced by Margaret in going through changes of his own.

But what stands out the most about this novel is its function as a first-hand report on the rise of industrialism in England, and the problems that have started or grown as a consequence. Strikes leading to unnecessary violence… classes divided into rich or poor, where poor workers can no longer feed their children… and a struggling mill master trying to keep his own head above water in the meantime; there is no work if there is no mill.

What I have noticed is that the dialogue between characters in this novel is sociologically valuable. Allowing characters to discuss the strike or poverty was an opportunity for Gaskell to show both sides of the debate of the social situation at the time and to create understanding with room for empathy. Gaskell proved herself to be remarkably intelligent. As I read, Iâ€™ve come to admire Elizabeth Gaskell, not just because I am an appreciative reader, but because I am a woman, too. She did us proud.