It's 2012. Kwok Yun is biking alongside the rice field Silver Hill Village (China), when she spots a UFO and has to help a very wounded, very blond foreigner (where did he come from?) only moments after she herself has blacked out. Kwok Yun, a plain peasant girl, becomes somewhat of a celebrity all of the sudden. Soon, the National Security and Intelligence Agency catches wind of the event, and heads out to Silver Hill, bombarding the entire town with questions about what has happened. Soon, Silver Hill as it used to be vanishes behind men in suits and UFO hotels… and for the villagers, everything they have ever known and cared for vanishes before their eyes.

UFO in Her Eyes is funny and original (written in 'interview-document' form), and interactive to boot. It starts off quirky enough, but it turns out to be a bit more moody quickly, and even slightly scary later on. Xiaolu Guo paints an eerily recognizable picture with her new novel, which focuses on (enforced) change and its side-effects. Through her characters, Guo speaks of powerlessness against losing everything you worked your entire life for. Government control is a theme here too, I think, as they decide the course of events, how one lives, what one owns.

UFO in Her Eyes is the second book by the young Chinese writer and film-maker that I have read. The other is A Concise Chinese-English Dictionary For Lovers. Both books are so extremely different from one and other; this shows Xiaolu Guo's versatility as a writer. (I am definitely going to be reading 20 Fragments of a Ravenous Youth; I wonder what else she has up her sleeve.) Both books, though, are centered around some facet of Chinese culture and/or society.

In the case of UFO in her Eyes, there's small town China, up against the big hats in Beijing. With the sighting of a UFO, it seems aliens have really invaded Silver Hill: they're the suits, the bureaucrats – taking over the world as the villagers knew it. As far as the villagers are concerned, the UFO has landed, anyway.

In ways, this book reminds me of Douglas Coupland's work – for example Girlfriend in a Coma, a prophetic novel in a way as it speaks of the consequences of mankind's self-destructive tendencies. Consequences that are likely to occur if we keep this shit up.

UFO in Her Eyes has a similar message: when there's just the slightest taste of having more, we want it, and then we want more, and more… and who cares what happens to other people, or animals, or heck – and this is where it truly gets recognizable in this day and age – the economy? The greed of some brings ruin for all.

I was expecting a light read, I actually got a lot of food for thought wrapped in a sassy novel – which is pretty much excellent. The world today is Silver Hill Village, in my eyes. Our UFO has been sighted.
Let's get a few copies of this book to every banker who wanted more, and more, and decided his bonus was more important than other people, or animals, or heck. The economy.

(…if only then the book would actually get through to them…) 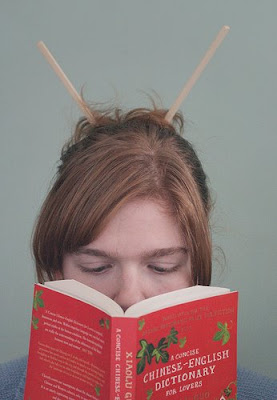 "Sorry of my English", an apologetic twenty-three year-old Zhuang (Z) jots down as she begins her journal-esque narration about her year abroad in London, hoping to learn the English language. At this stage, she doesn't yet realize that she's about to learn a whole lot more. Making her way through confusing London, her concise Chinese-English dictionary at the ready, she meets and falls in love with an Englishman twice her age.

When you have a young Chinese woman move to England, naturally the cross-cultural differences between East and West are not to be left out; they are observed and mentioned by Z throughout her journal. She critiques certain Western habits in a funny and truthful manner (for instance, she can't grasp the idea of Western politeness and blurts out everything she thinks), and often she actually has a point.

Westerners do gain some insight in Eastern culture by reading this novel, but also of what it's like to move to another country, dealing with another culture. Seeing as Xiaolu Guo has been in the same position as Z, it seems to be a truthful account of what it feels like for one person to be confronted with two distinctly different cultures. A delightful technique used to authenticate Z's struggle with learning English is the clear improvement of grammar and spelling as we read on. (It is this particular feature of the book which got me interested in buying it.)

But more so, this story is about a young woman who loses herself in a relationship, straying further away from herself… but it feels necessary in order for Z to find herself once more.

To her this man is ideal; she romanticizes their relationship and him, while in reality his flawed character doesn't have anything to offer Z – certainly not a future together. We know it, Z doesn't. Not only new to English culture (or Western culture), our naive heroine is completely unfamiliar with what it means to love and be loved, and is in for a tough journey of self-discovery.

Love is blindness, after all.

She appears to be writing this journal to her English lover ("you"), which gives this narration its intimate atmosphere, and its honest style – almost like reading private letters – is exactly what helps the reader understand the awkward position Z is in, with her idealisation of a relationship where love is anything but requited.

Not your most typical novel – unlike everything I've ever read before, anyway – but that is a definite plus. Whether you are looking for a book on cross-cultural experiences, or in need of a strong story about the development of self, this is a book to consider.

Either way – reading this story has made me curious about Guo's other work. When the time is right, I'll be sure to try another novel.