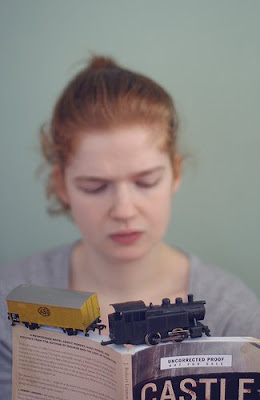 Lennon immediately captures the foreboding atmosphere; all it takes is reading the first few pages to sense that something lurks beneath the surface and it isnâ€™t pretty. This feeling is not at all eased by our elusive protagonist, who does not really share anything about his plans and what drives him. Loesch is hostile as well as distrustful, and he shuts out everyone he encounters.

So much of the first chapters involves a play-by-play of construction work and hiking routes. I feel as though I got to know the interior of the fictional hardware store better than I got to know â€˜the guy telling his own storyâ€™. (Perhaps my lack of enthusiasm about hiking and construction has something to do with being female; I did experience the book as â€˜very masculineâ€™.)

But eventually, we do learn more about Loesch and I have to say, taking into account that upbringing and personal history both play a big part in the forming of oneâ€™s personality, Lennon has really managed to create Loesch accordingly. Considering what Loesch has been through, his personality traits are convincing and understandable, in a way.

Yet, speaking as a person with a masterâ€™s in psychology, I canâ€™t help but be skeptical of certain events from his past, much less of the circumstances in which they are revealed to us and to Loesch himself. The story suddenly plunged into a set of complicated and confusing psychological (or psychotic?) events; it was overwhelming and hard to accept.

Now that Iâ€™ve finished the novel, Iâ€™m still not sure what to make of it, and of its relation to the ending, and vice versa. The ending does, yet at the same time does not, connect to the whole story. (You know how sometimes you read a novel and in the back thereâ€™s a â€œpreview to the new novel by… first 10 pagesâ€? Thatâ€™s the effect Castleâ€™s ending had on me.)

Nonetheless, the bookâ€™s eerie atmosphere was well formed from the get go; the dark, suspenseful mood of the story made me want to finish it. Despite my dislike of Loesch, I was curious and hopeful he would open up. Eventually, some sense of closure is offered.