Banana Yoshimoto to me is synonymous to atmosphere, moodiness: beautiful imagery and descriptions. A fantastic novelist, talented and sensitive. No wonder she's so popular in her native Japan.
N.P. is her fourth published book (following Kitchen, – which I read a few weeks after finishing N.P. – Asleep and Goodbye Tsugumi. It is, however, the second book to be translated in English.

When renowned Japanese author Sarao Tasake commits suicide, he leaves behind an unpublished English story: his ninety-eighth story, which is about the author's affair with his daughter, Sui. It is the task of translators to bring this final story to the Japanese public. But the work never manages to be complete, as all three translators who've attempted to translated the story so far have committed suicide.

One of these unfortunate translators was Shoji, who's still sorely missed by his younger lover, Kazami. Kazami still owns the ninety-eighth story and has a hard time letting go of it – it is all she has left of her former love. Holding on is all she can do.
So when Kazami meets three people connected to the author Tasake (and thus indirectly to Shoji), she finds herself instantly drawn to all three of them, wrapped up in their lives. She meets Tasake's son and daughter, Otohiko and Saki. And Otohiko's girlfriend: Sui.

…not exactly your garden-variety subject matter.

While Yoshimoto is still one of the strongest descriptive authors I know, I feel there has been a loss in translation – the language seems simplistic.

[2014 – review amended. I initially definitely blamed the translator on the following, probably because the rest of the translation seriously bothered me, and failed to impress me. I even think it angered me, and lead me to assume. But there is no way of knowing what happened. Perhaps it was an error. Perhaps not. Read on:]

When Yoshimoto talks about what is in reality a "half-sister", Â the term "step-sister" is used instead. One of the themes of N.P. is incest and the dark feelings, the unhappiness, that comes with these relationships, where love and sex cross the line drawn by shared blood and DNA. There's a big difference between half- and step-sibling: step-siblings are not related to each other by blood. It was actually confusing in the beginning, and it also took away from the impact on the reader. Incest is an intense theme. Yoshimoto was very direct about it (which was her goal, I think) but then again might have beat around the bush by having her (unreliable?) narrator be so in denial about the situation, she chooses to refer to her half-sister as her step-sister and thus making it a deliberate error. That, or something profound did get lost in translation. Either way, it bothered the hell out of me, no matter who's to "blame". I felt, if you're going to write an intense book about incest, at least call it – or translate it to – what it really is. That's what irritated me and that's what I should have pointed out in my initial review.

Back to the subject of translation [and here ends my edit for 2014].

The translation generally is not up to par with Yoshimoto's writing. Ann Sherif, I feel, doesn't do the book justice. I've read a few more of Yoshimoto's works, and really do feel this way. And I can't help but wonder whether my critique of other facets of the book are due to Yoshimoto's creative decisions, or the translation. So what I note below, you must keep in mind that it could all be due to an ill-fitting translation.

N.P.'s premise sounded interesting to me: suicides connected to a story, I was intrigued. But that storyline doesn't really take off: Yoshimoto instead focuses on the feelings those people involved in incestuous relationships would have as well as depression.

My biggest problem with N.P. is the God-awful choppy dialogue. It's a hot mess; characters hop from one subject onto the next and the way they converse is so blunt at times, it seems unnatural. It's too matter-of-fact and cringe-worthy. Any emotion – and a book about suicide and incest, well, there's emotion there – gets lost in this strange directness. It's harder to connect to the characters, but it can be done because N.P.'s characters are developed enough. These characters and their flawed inner beauty save N.P. and are what makes this a good (enough) read: N.P is a simplified novel (or translation…) with complex and thus interesting characters.

Sui is the best example: such a lost character, erratic and impulsive with low self-esteem and no aspirations other than taking it day by day. She seems full of life and energetic, but embraces melancholy and appears to be older than her age. Sui seems to me a very tired person. The Sui in suicide.
Yoshimoto urges us to feel compassion for people like Sui, her brother and her father (and even Saki, who stood by without saying a word), because these people have been tormenting themselves enough already. Guilt is a killer: Sui and those around her struggle with being alive. A heavy theme, but Yoshimoto keeps it light enough without losing the serious nature or the beauty of her writing.

"From the moment we met, I was a butterfly that flew into that space that was his soul, a room where the light had begun to dim."
– p. 28

I didn't enjoy the dialogue, which makes up for a large chunk of the total text, but how I love Yoshimoto's melancholy descriptions as well as her images of sun, summer feeling, orange light (a major theme in this book – figurative darkness versus literal lightness). Her imagery, put into words, always grips me. And while the dialogue is robotic in ways, the narration itself is comfortable: it's Kazami remembering a period in her life and recounting it as if we were there, listening to her.

So N.P. does have a lot of qualities to it, but it is not my favorite book of Yoshimoto's. I can't help but to ask myself, forever, if this feeling would have been different had the translator been someone else. I think partially, yes – but I also do believe Yoshimoto can do (and has done) better. 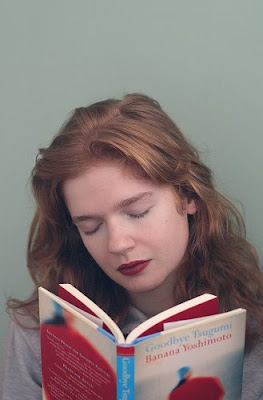 When reading Hardboiled & Hard Luck earlier this year, I fell in love with Yoshimotoâ€™s ethereal, gentle prose and her ability to create an almost tangible atmosphere with her words; I wanted to read more of her work. Over the next few months I bought copies of Kitchen, Asleep and Goodbye Tsugumi, the latter of which I will be reviewing here.

In Goodbye Tsugumi, Yoshimoto explores the seemingly fragile relationship between two girls â€“ cousins â€“ living together in a quiet seaside town in Japan. Born to unwed parents, for several years Maria has been sent to live at her auntâ€™s inn with her two cousins: introverted Yoko… and Tsugumi, whose temperamental nature has put a strain on Mariaâ€™s own childhood. Chronically ill ever since she was born, Tsugumiâ€™s insufferable and at times cruel behaviour was just something everyone had to tolerate and endure.

When her parents eventually are able to form a family together with Maria, she leaves for Tokyo, trying to let go of Tsugumi and to become her own person. But as the familyâ€™s inn is on the verge of closing, Maria takes Tsugumi up on her offer to spend one last summer together, a summer that will bring forth change: Tsugumi is confronted with caring for someone other than herself. Maria learns to view Tsugumiâ€™s character in a different light, finally understanding that their bond has always been solid, and is now stronger than ever.

There is not a lot of plot going on in this novel, but it is the relationship and its changes which are meant to be researched. Mariaâ€™s struggle with her changing feelings for Tsugumi is clear and understandable; the deeper connection between Maria and Tsugumi is convincing and memorable.

I do, however, wish Mariaâ€™s other cousin Yoko would have been included more directly; she was perhaps tyrannized by Tsugumiâ€™s nature even more than Maria. Instead of bringing more focus to Yoko, a new character in the form of a young man is brought into Tsugumiâ€™s life. But itâ€™s not really his view of Tsugumi and interaction with her which proved to be interesting; apart from Mariaâ€™s account, it was Yokoâ€™s additional point of view that I needed, and missed.

Had Yoshimoto paid more attention to Yokoâ€™s experiences as Tsugumiâ€™s sister, who knew her from beginning to end, Tsugumiâ€™s development would perhaps have been more meaningful. It wasnâ€™t just Maria and Tsugumi growing up together; there was also Yoko.

Her shy and quiet demeanor turned Yoko into an enigma, inaccessible. An unknown, but possibly an invaluable force.

Despite this missing element, there is still a peaceful sort of balance due to the remarkable phrasing, the delicate tale of acceptance and the idyllic descriptions of that Japanese seaside town. Goodbye Tsugumi reads like a beautiful, flowing poem which has put a lump in my throat more than once.

Edit October 12th 2009: One way or another, I kept reading Tsugami instead of Tsugumi. I don't know why my brains did that, but today I found out that I kept reading and spelling the actual title and name of one of the main characters wrong. I apologize for that. 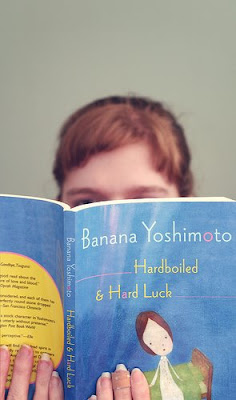 While I am usually hesitant, or even unwilling, to buy a new book that is not only really thin, but is also designed to have as little text as possible on one page, what I have heard about Banana Yoshimoto convinced me nonetheless to go ahead with the purchase of â€œHardboiled & Hard Luckâ€.

Size, after all, shouldnâ€™t matter.

In the first story â€œHardboiledâ€, the narrator â€“ a strong female presence â€“ finds herself in a small hotel after a long hike in the mountains. There, the memory of a loved one haunts her dreams, keeping her from finding rest at night â€“ a night already interrupted by another mysterious hotel guest in need of her help.

Right from the beginning of â€œHardboiledâ€, I felt myself drawn into the atmosphere, created without the use of abundant descriptions. Yoshimoto has the talent to set moods in her stories by using a limited amount of words and careful narration. No images drawn, photos taken, could really do justice to the mood and surroundings conjured up within the readerâ€™s imagination.

In the case of â€œHardboiledâ€, the mood was mystical and dark, but holding a sense of magical wonder â€“ a beautiful juxtaposition.

Knowing the already small book comprised of two stories, I was sad to say goodbye to â€œHardboiledâ€ as it came to an end, because that would mean Iâ€™d have to leave that atmosphere behind.

I was wrong, however, in assuming â€œHard Luckâ€ would be lacking compared to â€œHardboiledâ€; on the contrary. It was better.

Yoshimoto allows another female narrator to share her thoughts as she deals with her dear sisterâ€™s comatose state â€“ without any hope of her ever waking up. A different juxtaposition occurs in this story; while mourning the inevitable loss of a sisterly relationship, the narrator finds comfort in forming a bond with the brother of her sisterâ€™s fiancÃ©.

Yoshimoto, in both stories (but in the last one especially), touches on the subject of tragedy without allowing for sentimentality. Instead, there is a wisdom about her writing, a quiet acceptance.