The Angel's Game brings the reader back to that darker Barcelona which Carlos Ruiz ZafÃ³n introduced us to via his previous novel, The Shadow of the Wind. This time around, we go back a few decades, into the roaring twenties, when young David MartÃ­n's career as a writer of pulp fiction (under a pseudonym) takes off and brings him to unexpected places, from the Sempere & Sons bookshop to the Cemetery of Forgotten Books (both familiar, if you've read The Shadow of the Wind).

What I loved about The Angel's Game is the Gothic atmosphere of the story, the author once again successfully surrounding his characters with what I now consider to be his beautiful, dark Barcelona. The Angel's Game is darker than The Shadow of the Wind, with more supernatural elements, the mood well crafted and maintained throughout the book. I marvel at ZafÃ³n's Barcelona. (And this book has made me want to visit it, which I will in December.)

Though ZafÃ³n developed his protagonist very well, I felt he lingered on David's (wallowing in) emotions and feelings, which took away from plot development. David was a slow character in the sense that he did not take much action and he lacked actual passion, and neither's a really good thing for a mystery novel. 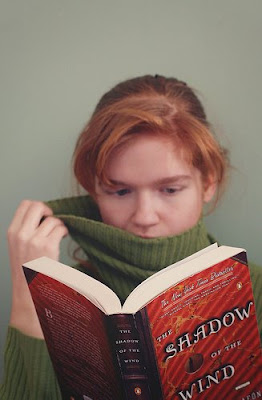 At age 11, seven years since his motherâ€™s passing, Daniel is introduced by his father to a secret place: The Cemetery of Books, where he finds the novel â€œThe Shadow of the Windâ€ by Julian Carax.

The book has a profound impact on Daniel, so much that he wishes to learn more about the author and his other work, only to quickly discover that someone out there has been burning all of Caraxâ€™s work. Daniel, however, refuses to let it go; he is determined to understand the man who has moved him so through his writing.

In a post-WWII Barcelona, Daniel comes of age while unraveling a mystery so dangerously well hidden, a secret so well kept, the search leaves serious consequences for Daniel and everyone else involved.

Two parallel stories â€“ that of Daniel and that of Julian â€“ are told so colourfully next to eachother, itâ€™s hard not to admire the storytelling abilities of the author. His diverse and well developed characters each in their own way add to the plotline â€“ even the warmly described city of Barcelona plays her part in the background.

All in all, the book has certainly been an interesting and innovative read with memorable characters; however, due to predictability not suitable for a mystery novel as well as the almost quick resolve to the story, the book receives a 4/5 rating from me, even though it seemed promising enough for a 5/5.