To celebrate Reading & Reviewing's upcoming 100th review, I'm challenging myself by posting a new review daily for a week! This to give the blog some life, and to catch up on some reviews – because I've been reading about twice as much as I've been reviewing lately.
To start off the 100th review week – here's #098. For a while, most of the books I could be found reading were either written by Gabriel Garcia Marquez or Paulo Coelho. There was just something about their writing that gripped me; there was passion in these men’s novels, a touch of the mystical or spiritual intermixed with deeply human themes – and a focus on discovering others or the self, especially in Coelho’s books.
I am a pretty skeptic person in my everyday life, but Coelho’s books allow me a little bit of an escape from that. I am unapologetic about reading Coelho’s novels.

Maria is young girl disillusioned by love after suffering heartbreak at a very young age. She believes love will only bring pain.
On holiday in Rio de Janeiro, our naive protagonist finds herself swept away to Switzerland, where she can envision a new life for herself as a model, or an actress – anything glamorous, involving making lots of money. Little does she know that she will indeed make a lot of money in Geneva: as a prostitute. Maria, however, handles it with detachment. She's making loads of money. And it’s just sex after all.
But then she meets Ralf, a handsome artist who is instantly taken by Maria’s beauty (he sees a light in her) and wants to prove to her that love can exist. Will Maria allow her heart to open up again, or will she continue the darker life she has begun in Geneva, where as a prostitute she is convinced love can only be combined with hurt, not with pleasure (sexuality)?

Coelho writes in a way that captures your attention. His subject matter may not (always) be to one's taste, but I do think he writes beautifully and with wisdom; usually when I read his books, I'm captivated from the first sentence. He regularly makes me stop for a moment to consider what I've just read.

Coelho's books, as mentioned, usually involve a protagonist on the path of self-discovery. Eleven Minutes attempts to look at self-discovery from a different angle: sexuality (and I really couldn't word this sentence differently).
I appreciate that there is such openness about sex in this book. Sexuality is, after all, natural to human beings. Without sex we would not exist.

That said, the shock factor for which Eleven Minutes has been praised is non-existent for me, but that's because I was raised in a household where the subject of sex wasn't ignored or tabooed. Generally in this country (The Netherlands), we don't fuss about nudity on TV as much as elsewhere.

And while I'm at it – the prostitution story is also not shocking to me. Prostitutes work legally and pay taxes here. I personally don't have to like it, but I appreciate living in a country where it's not going to be hidden away, but where we opt for openness instead. (Let's face it: it exists everywhere.)
Prostitutes often have a rough life; Maria's seemed to be a little easy-going at times. Diet-Prostitution. (She doesn't seem too bothered with her disposition. She figures she can quit a year from now, no problem – and no impact on her psyche at all. It seems unrealistic.)

But these are my personal experiences. The themes Eleven Minutes addresses could understandably be seen as provocative by other readers.

So while Maria's occupation didn't really rock my boat, I felt very intrigued by Maria’s thoughts, motives and point of view.
Maria's an interesting character, an unlikely heroine. A prostitute, but also a caring autodidact who wants to help her clients in more ways than the obvious. A sweet young woman, but I mostly just saw her as 'Foolish Little Girl', disillusioned by love at a young age (haven't we all?) but unable to rationalize it.
A lot of young girls haven’t truly experienced real love yet, not enough to be able to make decisions about it – to never love again – like Maria has. For an adolescent girl, she's far too cynical. It's misplaced – but therefore interesting.

Coelho tries his best to understand his young protagonist. He paints an interesting picture of her in the first half of the book, which was most fascinating to read. Later on, though, it started to become a little less about Maria, and more about the message Coelho wanted to get across.
Maria, as I established for myself, is immature and naive. Yet she sometimes spews out these incredible wisdoms – that's obviously the author speaking, not an adolescent prostitute. Coelho makes Maria address this though: "I am aware that there are certain phrases which are not written by me," Coelho has Maria write in her journal entries, "but by a woman full of light". We are to believe, then, that Maria is maturing mentally and finding self-worth, finding the woman, wife, mother within. Self-discovery, en route to it.

Unfortunately, I still heard Coelho doing all the talking, not a wiser Maria. What didn't help here was the distanced narration or the idea that a middle-aged man knows how a young girl like Maria OUGHT to feel. Maria is Coelho's creation, he can do what he want. But as he speaks for Maria, Coelho – perhaps unintentionally – tends to speak for Woman.

Despite having perpetually raised eyebrows during the second half of the book, the story still remained interesting to me. I wanted to know which decision Maria was going to make (though I suspected, of course, that she would go for the happy ending – Coelho's book have a feel good factor). I wanted to know where Maria's road would end: in darkness, or light – light being able to love fully, with body and soul (at the same time, preferably). Is she willing to take the risk? Coelho may have focused a bit much on The Message in the end, but he did make me care about Maria in the process.

One little thing that bothered me to the extent that I cannot consider this review to be finished unless I mention it (and I quote from p.45 of my edition): "In Brazil she had read about a book about a shepherd who, in searching for his treasure, encounters various difficulties, and these difficulties help him to get what he wants."
*cough* The Alchemist, anyone? *cough*

A skeptic in life, I remain. But a skeptic who's read yet another entertaining and interesting book. 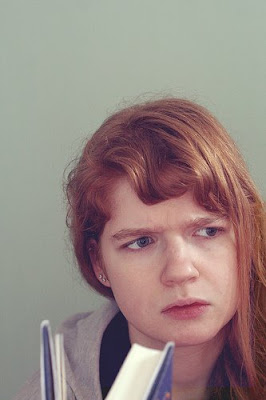 This would be the fifth book by Coelho that I’ve read over the past two, three years. There has been The Alchemist, naturally. Two books of his I’ve also enjoyed are Veronika Decides to Die and The Zahir. The Devil and Miss Prym was a unique novel.

And now, his latest novel. Through various first-person accounts, the ‘biography’ of an influential young woman begins to unravel. Born a gypsy, but raised in London by adoptive parents, the always restless Athena goes in search of her path – ways to fill the emptiness in her life. The blank spaces, the silence. Through the eyes of the people who knew her, loved her, despised her, raised her, taught her or heard of her, we learn of Athena’s life as she grows out to be a leader hoping to inspire people to find their own spirituality as opposed to living by what society deems is the proper way to have faith.

And in the meantime The Witch of Portobello, like all others by this author, has the intent to allow the readers to look inside themselves as well.

But in this case, I could not relate in any way to Athena or what she stands for. Though I never had trouble with Coelho’s books before, this time I couldn’t interpret most of his messages and transform his words into something that could touch me. Perhaps this time, my skepticism won.

As evident from the self-portrait accompanying this review, it’s clear that upon finishing this book, it felt as though something was missing; to my own surprise, and contrary to my experiences with Coelho’s other novels, I was left dissatisfied.

Though it by no means was an average or dull novel – despite its thin plot, it was entertaining and it definitely had its originality – having read and being moved by his other novels, I have to compare this novel to Coelho’s other work. And in that comparison, ironically, this book about a powerful, modern witch didn’t quite have that magic touch.